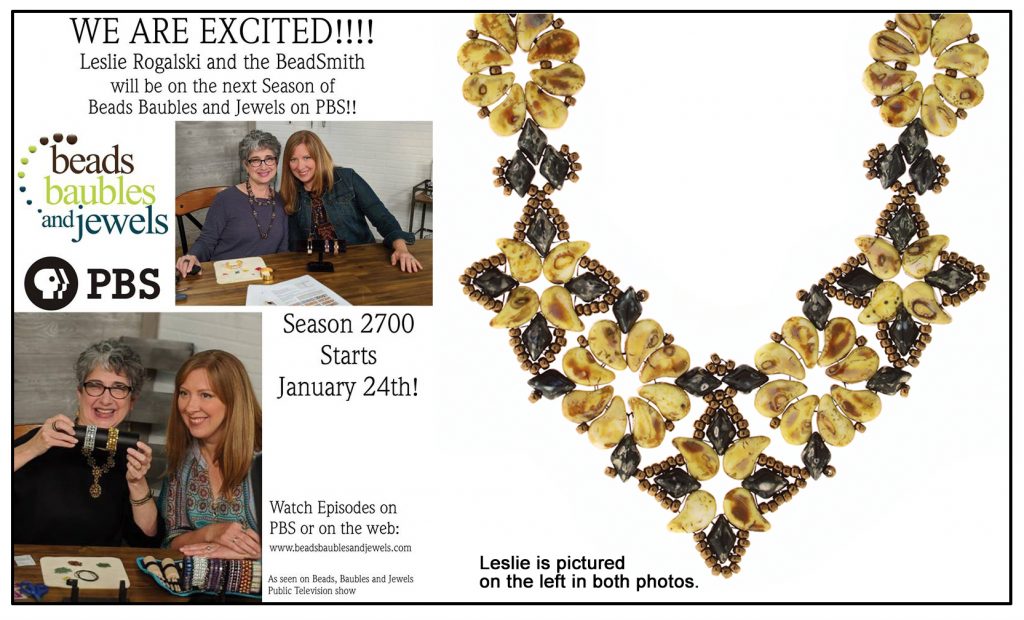 Leslie Rogalski is an artist, teacher, and media personality with a passion for creating beaded jewelry. She is a regular on Jewelry Television, a featured guest on the U.K.show “Jewellery Maker” and has an online class for Craftsy called “Five Essential Seed Bead Stitches.” Leslie has appeared in the PBS TV series Beads, Baubles, and Jewels for many years. She continues to travel around the country to bead events spreading the joys of making jewelry in her current position as creative Director for The BeadSmith, a global wholesaler of all things beady.

Philadelphia born, Leslie started as a freelance illustrator, product designer, and writer, but once she learned to sew several years after graduating from The University of the Arts, she started a line of wearable art marketed through The American Craft Council shows and reps. From there her art evolved into totemic, figurative sculpture, working with a weaver for unique handwoven fabrics that were embellished with beads, feathers, shells, and more. When her weaver friend stopped making fabric, Leslie continued playing with personal adornment, especially using beads. Leslie’s beadwork brought her attention from local bead shops, who introduced her to bead magazine publishers. She became the editor in chief of a national publication but left after seven years to become the freelance tech editor for another magazine and designer for several major jewelry industry leaders. All these companies put her on several TV shows and in videos to inspire and teach others. Along the way, Leslie joined with one of her sisters, Deb Mudrick, to form Sleepless Beader™, selling her designs as kits and teaching with her along the East Coast. Eventually a position opened with the global bead wholesaler, The Beadsmith, and she has been there since 2015 as their Creative Director. She designs beaded jewelry, writes tutorials, works with designers around the world in support of Beadsmith products, manages social media with customers and resellers, makes FB live and YouTube videos, contributes to product development, and continues to appear on TV in the US and the UK.

Leslie describes her work as minimal. Ethnic and modern at the same time because she often brings in organic focal elements (fossilized materials) as well as industrial items including rubber O rings and metal. Her work is textural, about shape and form, very constructed, organized, and geometric. She has also started playing with polymer clay to make her own components. Leslie’s husband, illustrator Mike Rogalski, says “she takes the beadiness out of beading.” It’s true because she takes the “many” and makes them “one.” Leslie says,” I play with beads. I am about “What if” I did this, or “What if “ I changed that.”

Leslie has been a member of the Haverford Guild since 2014 and is a Master Artisan. Along with her busy work schedule, she does one or two Guild shows a year and maintains the web site leslierogalskibeadworks.com where she showcases and sells her finished work and tutorials.

Along with being in love with her husband and talented choreographer/performer/artist daughter, Leslie is a complete Disney World devotee, having gone through the College of Knowledge to become an authorized travel planner. In addition, with any free time she has, she chooses to make her own work and help her elder family members in senior living.