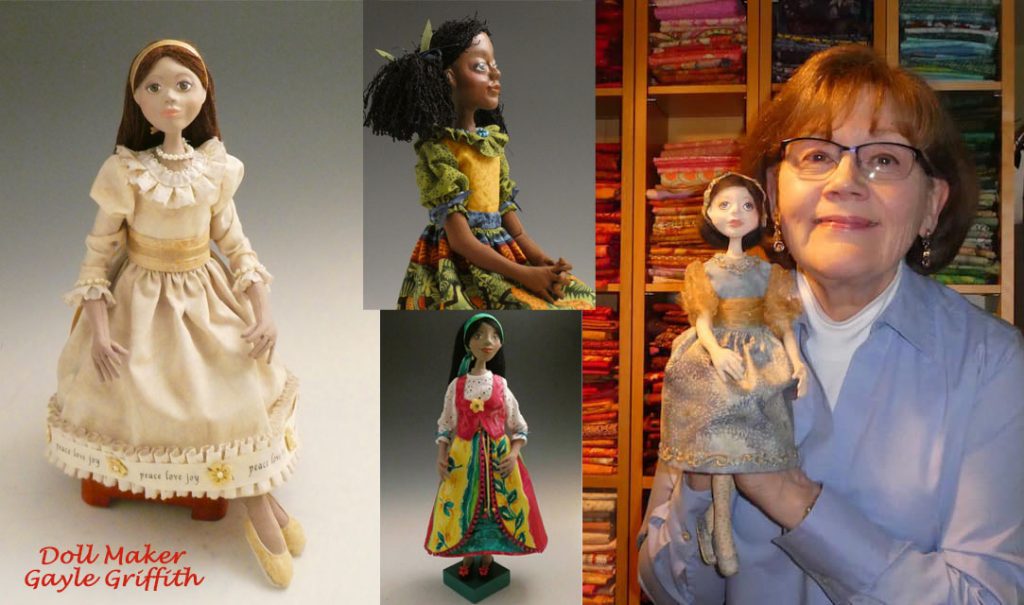 Doll Maker Gayle Griffith was born in Syracuse, NY.  As a child, she was always doing crafts and learned the skill of sewing from her grandmother, who was a seamstress. As a 17 year old entrepreneur, she sold little dolls she made and had them featured in Seventeen Magazine! The local TV news picked up the story and Gayle was also interviewed on a morning program in Syracuse. Who could have known that her 15 minutes of fame was a foreshadowing of her future work as a doll artist.

Gayle went on to get her Undergrad BA in English at the University of Colorado and did her graduate work in education at the State University of NY at Albany.

Gayle started out teaching high school followed by 10 years as the Residence Hall Administrator at State University of New York in Albany.  From 1985 until her retirement in 2011, she worked as a training specialist in the corporate world. In the meantime, she moved to Philadelphia and eventually bought a home with some friends in East Falls, right next to the house where Grace Kelly grew up.

Gayle’s keen mind and super organizational skills served her well in the corporate world; but all that time, her creative juices were percolating, and about 12 years ago, she discovered high-end art doll makers on the internet. She started taking classes and eventually got involved with NIADA (National Institute of American Doll Artists) and became very involved with the art doll community.

Her doll making incorporates so many of her creative talents, including her excellent sewing skills and the ability to use color and mix patterns beautifully. In recent years, Gayle has traveled extensively and has incorporated her impressions and inspirations from those travels into her doll making.

Gayle joined the Haverford Guild about 8 years ago and has served as a board member both as treasurer and more recently as membership secretary. She has been juried into both the HGC and the PA Guild of Craftsmen as a Master Artisan.

Gayle explains her philosophy this way: “I want someone to look at a doll and feel joy. That’s what it does for me. It gives me joy.”

In 2020, Gayle will be starting a new chapter of her life by relocating to North Carolina to be closer to family and friends. Though she will stay an HGC member, we will miss seeing her and are so grateful for all she has contributed to our Guild over the years. With all best wishes, we look forward to seeing the creativity that results from her newest adventure!